Boris Johnson is facing deepening peril over the Partygate scandal after a source said a fine had been issued for a second event attended by the prime minister, while senior Conservatives warned he could face a leadership challenge within weeks.

On Friday evening, No 10 was forced to deny Johnson had received another fixed penalty notice (FPN) for a “bring your own booze” Downing Street garden party on 20 May 2020.

In January, Johnson admitted attending the event – held during the first national lockdown when indoor and outdoor social mixing were banned – for about 25 minutes but claimed he “believed implicitly that this was a work event”. Johnson’s principal private secretary, Martin Reynolds, is said to have invited up to 100 people to the “socially distanced” evening drinks.

A source told the Guardian that at least one FPN was issued on Friday to a Downing Street official who attended the event. As Johnson finished a two-day trade trip to India on Friday, a spokesperson said he had not received a new fine.

On Thursday the Metropolitan police announced it would not provide any updates on FPNs for Downing Street lockdown breaches until after next month’s local elections “due to the restrictions around communicating” ahead of the 5 May vote, though the criminal investigation and issuing of fines could continue.

It came as senior party figures warned that Boris Johnson will probably face a leadership challenge if the Conservatives suffer significant losses at the May elections.

The prime minister was told his support was being “eroded markedly” after the government capitulated to allow a third investigation into lockdown breaches, sparking renewed jostling among those vying to replace him.

Allies of Jeremy Hunt, the former health secretary, and Penny Mordaunt, a trade minister, were said by MPs to have renewed discreet preparations for a leadership contest.

During an overshadowed trade trip to India, Johnson admitted he had got a “pretty good kick” from his backbenchers after the government tried to force them to delay a third Partygate inquiry, by the privileges committee, only to U-turn hours later. He vowed to fight on, insisting he would still be prime minister in six months’ time.

Meanwhile, infighting between his detractors and supporters spilled out into the open. Conor Burns, a Northern Ireland minister, dismissed criticism levelled at Johnson by some Tory backbenchers and said there were “colleagues across parliament who have never really supported the prime minister”.

Robert Hayward, a Conservative peer and elections expert, said MPs, councillors and Tory associations were fearful of the Partygate row stretching on indefinitely. “I expect that there will be some form of contest for leadership at some stage, not immediately,” he told the BBC. “But the support for the PM is being eroded quite markedly and has been since the recess.”

Hayward suggested Johnson’s downfall would be “death by a thousand cuts” given the various investigations by Scotland Yard, the senior civil servant Sue Gray and now the Commons privileges committee.

He revealed MPs were “looking around” to gauge who would be the most suitable replacement for Johnson and said: “They won’t necessarily admit it but that is the reality.”

Hayward added: “I think they’re moving to a position, from whoever they started, to a position of saying ‘this cannot go on and there is only one way of resolving that and that is by saying we will need some form of challenge, leadership election, whatever it may happen to be’.”

A cabinet source also predicted the local elections on 5 May could be as dire for the Conservatives as the 2019 European parliament elections, where the party won their lowest ever share of the vote.

Iain Duncan Smith, a former Tory party leader, said many MPs had not grown any more hostile to Johnson because of the poor handling of the vote about the prime minister being investigated for misleading parliament.

“Colleagues may decide it is recoverable. If they reach the decision it’s too damaging, then it’s over. That balance is just sitting waiting. I fancy that the local elections and inquiry will put that to rest.”

Steve Brine, a former health minister, was also revealed to have told a constituent that a confidence vote in Johnson “should take place … sooner rather than later”. He emailed: “This is not a sustainable situation and I suspect further FPNs will follow those issued last week. I will be liaising with senior colleagues to see that confidence is tested in the period ahead.”

Robert Largan, the new Tory MP for High Peak in Derbyshire, the 14th most marginal seat in the country, also told constituents he would not “defend the indefensible”.

“We cannot have a situation where it is one rule for politicians and another rule for everyone else,” he said. “I can assure you that I am taking the appropriate action to defend integrity in public life.”

Rory Stewart, a former cabinet minister, also predicted the May elections would demonstrate Johnson “has lost his magic and the Conservative MPs will then conclude there is no point staying behind him”.

Tory MPs who have submitted letters of no confidence in Johnson felt quietly optimistic that others would follow suit, and be given heart by the likes of senior backbenchers Mark Harper and Steve Baker calling on the prime minister to go this week. “They’ll just do it quietly or privately – until we’re left with these mad people who wouldn’t get anything under another regime,” one surmised.

Another MP supportive of Johnson admitted: “It’s so unpredictable and all seems to have changed again. I’ve gone from thinking he should be safe to thinking ‘this is it’.” A Conservative MP who previously kept an open mind about Johnson’s future diagnosed the concerns about his political leadership as “terminal”.

Winding up his two-day trip to India, an exasperated Johnson was unable to escape fresh questions about the Partygate row. He was adamant he would still be prime minister in October – when he hopes a free trade deal with India could be ready to sign – and insisted he was in India to discuss issues of interest to British voters.

“I think what people want in our country is for the government to get on and focus on the issues on which we were elected, and that’s what we’re going to do – and I think they’ll be particularly interested in jobs and growth in the UK,” he said, going on to highlight cooperation with the Indian government on green energy and defence.

In an odd outburst, responding to a question about whether he would compare himself to a cat with nine lives, he said: “We had a pretty good kick of the cat yesterday” but quickly added: “Not that I’m in favour of kicking cats.” 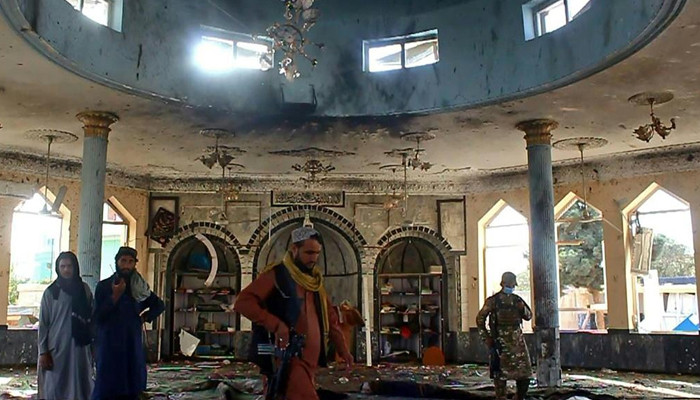 Floods kill over 300 in Nigeria this year | The Express Tribune

MAIDUGURI: Floods in Nigeria have killed at least 300 people this year and the situation could worsen due to heavy rainfall and the effects of […]

The shadow foreign secretary, David Lammy, has flown to Kabul to see at first-hand the scale of the humanitarian crisis in Afghanistan after the Taliban […]

Russia-Ukraine war: what we know on day 117 of the invasion