President Dr Arif Alvi administered oath to three federal ministers and one minister of state for Prime Minister Shehbaz Sharif’s cabinet at the Aiwan-i-Sadr on Friday, the first time the president led the ceremony involving members of the new government.

The president had previously “complained of discomfort” just a day before then prime minister-elect Shehbaz was to be sworn in as head of government. Shehbaz was then administered the oath of office by Senate Chairman Sadiq Sanjrani.

On Tuesday, 33 lawmakers were inducted in the new premier’s cabinet after they were sworn in by Sanjrani in the absence of the president, who had refused to administer the oath to the lawmakers, a Dawn report said, adding that a Cabinet Division notification issued at the time carried the names of 26 federal ministers and two ministers of state.

After the three were sworn in a federal ministers, BNP-M’s Hashim Notezai was administered the oath of office and inducted into the cabinet as a minister of state.

No details of their portfolios were immediately available.

PM Shehbaz was also present at the oath-taking ceremony, and was seated next to the President Alvi.

Earlier, a Dawn report, citing sources, had said President Arif Alvi was expected to go on leave over reported illness so that Sanjrani could administer the oath. Previously, the president had also excused himself from administering the oath to PM Shehbaz on health grounds after which Sanjrani had taken over the responsibility.

The oath-taking had taken place amid reports of difference among allies in the new coalition government and even within the PML-N over the selection of cabinet members and distribution of portfolios among them.

A source in the PML-N had told Dawn that there was a divide within the party over the selection of cabinet members and distribution of portfolios among them. He had said PML-N Vice President Maryam Nawaz was “unhappy” with the PM for not considering names of veteran party leaders, who had a close and long association with the party’s supreme leader Nawaz.

Later, another Dawn report had identified Javed Latif as one such party member, saying that PM Shehbaz had accommodated him in the cabinet to honour Nawaz’s wish. The report stated that Latif and Shehbaz had were not on talking terms since the former had raised questions over the latter’s alleged links with the establishment.

According to the report, Latif had not taken oath on Tuesday citing that he was busy in a party rally in Okara, a PML-N insider had told Dawn that the PML-N leader had done so because Shehbaz would not have been comfortable with his presence at the ceremony.

Meanwhile, there were also reports of the BNP-M of not joining the cabinet, as the party had accused the government of not preventing violent incidents in the province, such as the recent firing on protesters in Chagai.

A day after the oath-taking, Dawn had also reported that two main parties of the ruling coalition — PML-N and PPP — were also at odds over the selection of their members for the cabinet and distribution of portfolios. 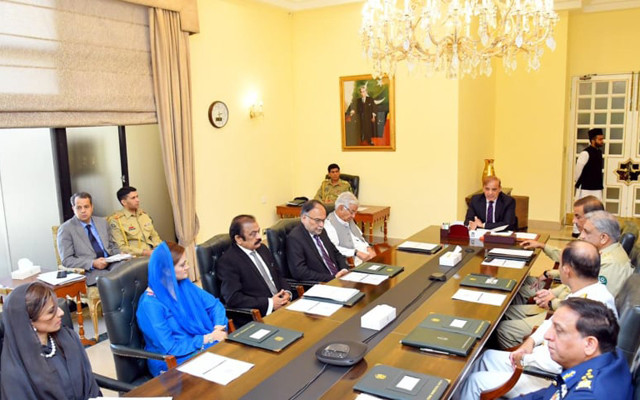 JHELUM: Pakistan Muslim League-Nawaz (PML-N) Vice President Maryam Nawaz on Monday announced that she would reveal the contents of the secret letter which was waved […]